CyberKnife is a radiotherapy system that consists of a high-precision robot arm of the kind used in precision industries and a small linear accelerator (Linac). 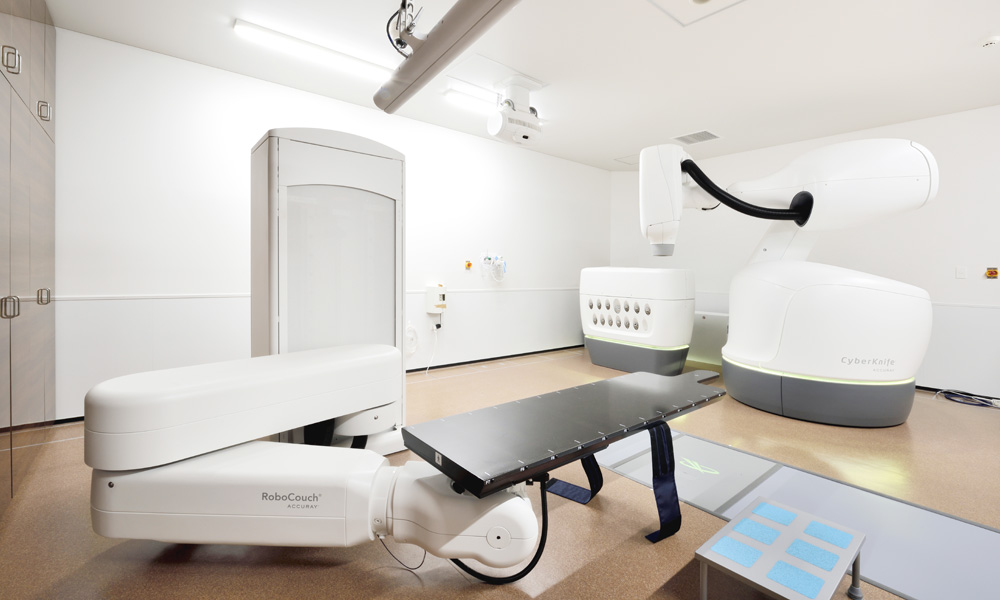 Using a freely moving robot arm, CyberKnife irradiates the target lesion from different directions. Its pinpoint irradiation of the target lesion minimizes radiation exposure to the surrounding normal tissue, affording fewer side effects and allowing elderly people and those who are frail to receive treatment. The system enables the pinpoint irradiation to be applied for risky cases in which surgery is difficult, and it enables lesions with an irradiation history to be re-irradiated. The choice between stereotactic radiotherapy and intensity-modulated radiotherapy depends on the treatment region and lesion.

For positioning, CyberKnife uses X-ray images taken by two X-ray photography devices installed on the ceiling. Position gaps are corrected by using a bed with six joints, called RoboCouch, and a robot arm. Even during irradiation, X-ray images are taken at regular intervals for localization. During treatment, position gaps are calculated for correction, and adjustments are made by the robot arm. These procedures enable accurate positioning and position correction, as well as advanced pinpoint irradiation.

This method is used for the head region, a region for which CyberKnife excels. The system recognizes the boundaries between the skull bones and the air and positions the entire head. Each patient wears a custom-made mask called a“ shell.”

At our hospital, CyberKnife can track and irradiate a lesion in the lung, liver o r pancreas that moves with respiration.* This can reduce the radiation exposure of normal tissue. Patients are not required to hold their breath. They can receive treatment while breathing normally.
*For some lesions. a metal marker is placed before treatment is administered.

In cases where X-ray images can be used to visualize a lesion in the lung for positioning, a moving body can be tracked without using a metal marker. In addition to positioning using the vertebral body, the lesion is used as a marker to maintain positional accuracy. High-precision treatment can be provided without a metal marker if a pre-treatment simulation shows favorable results.*
＊However, this method is limited to the irradiation of lesions in the lung.

Treatment session duration and number of sessions, and hospital visits

CyberKnife can deliver a high dose of radiation in each treatment. The duration of each treatment session is 30 to 60 minutes, including positioning, and the treatment is completed in one to several sessions. Outpatient treatment is usually possible. However, hospitalization may be recommended for certain medical conditions.
After the treatment, periodic imaging tests are conducted for follow-up. Follow-up observation may be made at another facility.

TomoTherapy is a versatile radiotherapy system that uses a small linear accelerator (Linac) embedded in a CT scanner. 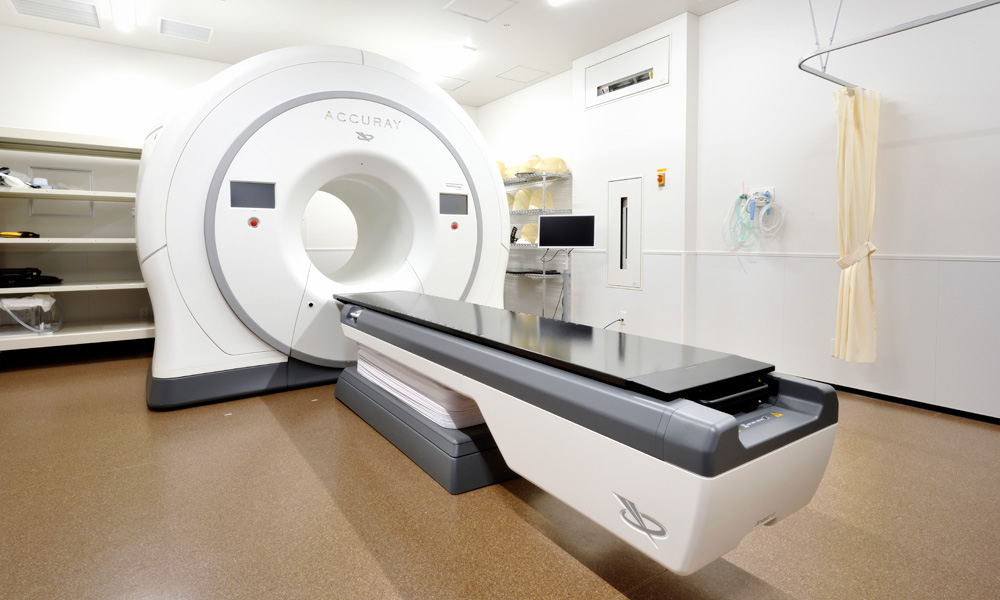 TomoTherapy is characterized by intensity-modulated radiotherapy, which is an effective treatment that has fewer side effects. In this irradiation method, the beam shape and irradiation time are varied according to the position and angle of irradiation. Various radiation beams overlap, causing the intensity of radiation to differ at those overlapping points. This makes it possible to deliver a high dose of radiation to the target site while limiting the radiation exposure of surrounding normal tissue. The number of fine beams per treatment site can exceed 10,000. Considering that there are also IMRT machines with beam numbers of 100 or so, TomoTherapy can be described as a high-end IMRT model. Radiotherapy plans involving TomoTherapy that save normal tissue and deliver high doses of radiation to the target provide accurate, beautiful distribution charts of radiation that cannot be achieved with other treatment systems.

Another characteristic of TomoTherapy is CT image-guided radiotherapy (CT-IGRT), which enables accurate positioning. Even when high-precision irradiation is possible, position gaps affect the therapeutic efficacy and side effects. TomoTherapy efficiently combines a CT scanner and a radiotherapy unit to provide high-precision positioning. A CT image is taken just before each irradiation to accurately determine the position of the target. If the gap is large, the position is corrected automatically or manually for high-precision irradiation. Unlike X-ray images, in which bones and markers are used for positioning, the target in the body and the situation of the surrounding tissue (e.g., the movements of breathing and of the intestinal tract, the size of the bladder and the stomach) are clarified by CT for positioning. This is the most direct and accurate IGRT system.

Moreover, TomoTherapy enables spiral irradiation, which is not possible with other IMRT systems. Spiral irradiation is achieved by slowly moving the bed of the patient through beams that rotate at an extremely high speed while changing their shape (photo). When high-precision IMRT is used in a spiral manner, successive multiple targets can be irradiated consecutively and targets in a wide area can be irradiated uniformly. Like radiotherapy after breast-conserving surgery, fixed-angled irradiation is also possible (fixed direct irradiation). With TomoTherapy, even fixed-angle irradiation can limit the side effects on the lung and the heart because fine beams overlap.

Treatment session duration and number of sessions, and hospital visits

The time required for a TomoTherapy session varies depending on the treatment range and site, but it is estimated to be approximately 20 minutes, including CT scanning and confirmation. The number of sessions also depends on the site, but it is comparable to that for conventional radiotherapy. Outpatient treatment is usually possible. However, hospitalization may be recommended for certain medical conditions. After the treatment, periodic imaging tests are conducted as follow-up. The follow-up observation may be made at another facility. 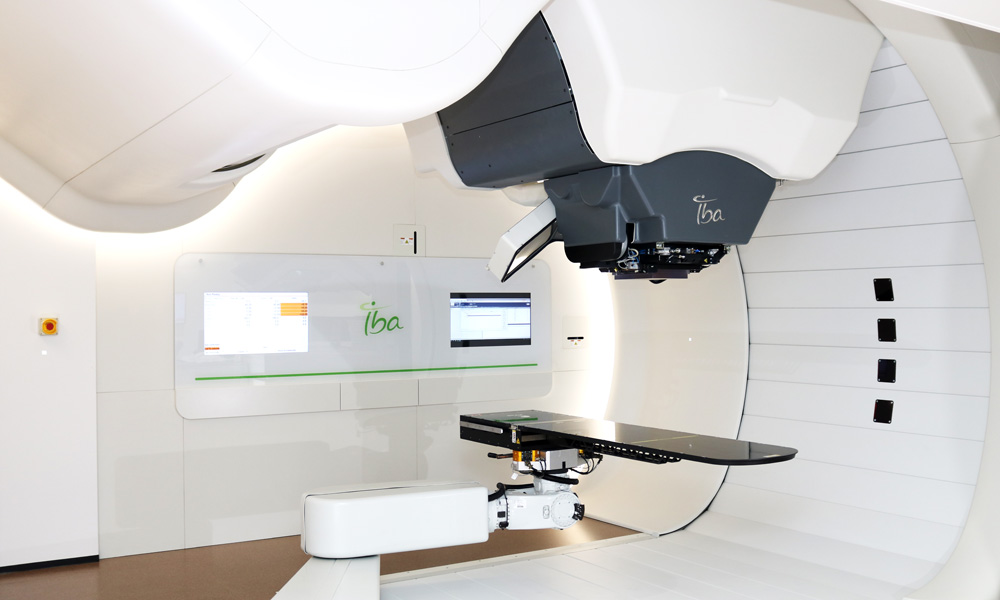 What is a proton beam?

There are various forms of radiation, and several of which are used in medical care. Of these, particle beams have been attracting attention for their therapeutic efficacy and fewer side effects. Proton beams are particle beams, and they are based on the proton, which is what remains after the electron is removed from the hydrogen atom. Protons accelerated in a large accelerator have a high level of energy, and protons with such energy are called proton beams.

Radiotherapies work by directing radiation energy against cancer cells. With conventional radiotherapies, the X-rays have the highest energy level immediately after they enter the human body and this energy gradually decreases during transit through the body. Regarding proton beams, the energy level is low immediately after the beam enters the human body, but it suddenly becomes high at a certain point before becoming zero (the Bragg peak effect). Proton therapies are possible by providing such peak energy to the lesion. Compared with conventional radiotherapies, pinpoint therapeutic efficacy can be expected from proton therapy. It is an efficient therapy that minimizes the impact of radiation on the surrounding normal tissue.

If the beam cross section has a greater area than the lesion surface, it is necessary to shape the beam such that it conforms to the lesion, in order to accurately treat the periphery of the lesion. ProteusOne should be applied to fill the lesion with a fine proton beam of 5 mm. Such a beam is called a pencil beam, because it treats the lesion as if drawing with the tip of the fine proton beam. The lesion is separated into layers, and each layer is irradiated as if it were being colored by a pencil beam moving at high speed (scanning irradiation).

Flow from medical examination to treatment

Patients are provided with medical examinations based on referral letters and imaging data from their regular doctors. Doctors from multiple clinical departments examine the lesion and determine whether proton therapy can be applied. If the cancer committee grants its approval, preparations for treatment will begin. As with conventional X-ray therapy, a brace is made to reproduce the same posture every time, and CT images of the patient wearing the brace are taken for therapeutic planning. MRI may be necessary, depending on the lesion type and site. Based on these images, a therapeutic plan is developed to determine the angle, depth, dose and frequency of proton beam application. Medical physics specialists and radiotherapy technologists verify the accuracy of the therapeutic plan so that the planned irradiation does not cause any problems to the human body. After the plan is approved by doctors, the proton therapy begins.

The period of proton therapy varies depending on the type of cancer and the irradiated site. It can range from a week at the shortest to two months or so at the longest. Irradiation is basically performed five times a week from Monday to Friday except national holidays. Outpatient treatment is usually possible. However, hospitalization may be recommended for certain medical conditions. After the treatment, periodic imaging tests are conducted as follow-up. Follow-up observation may be made at another facility.

If you have any questions, please feel free to ask.

Major diseases amenable to these treatments

*In addition to those mentioned above, there are other diseases that are amenable to treatment.
It is necessary to check and study the clinical history and the results of various tests. Please contact us.

Combination of radiotherapy and immunotherapy

Activated killer lymphocytes can attack and kill cancer cells, except when the cancer cells have acquired the ability to disrupt the immune checkpoint system and evade an immune attack. It has been clarified that such disruption of the checkpoint by tumor cells is the predominant cause of immune dysfunction in cancer. 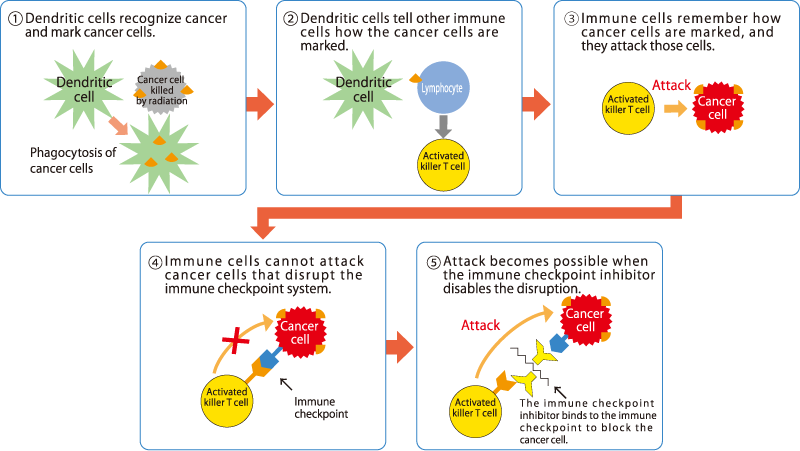